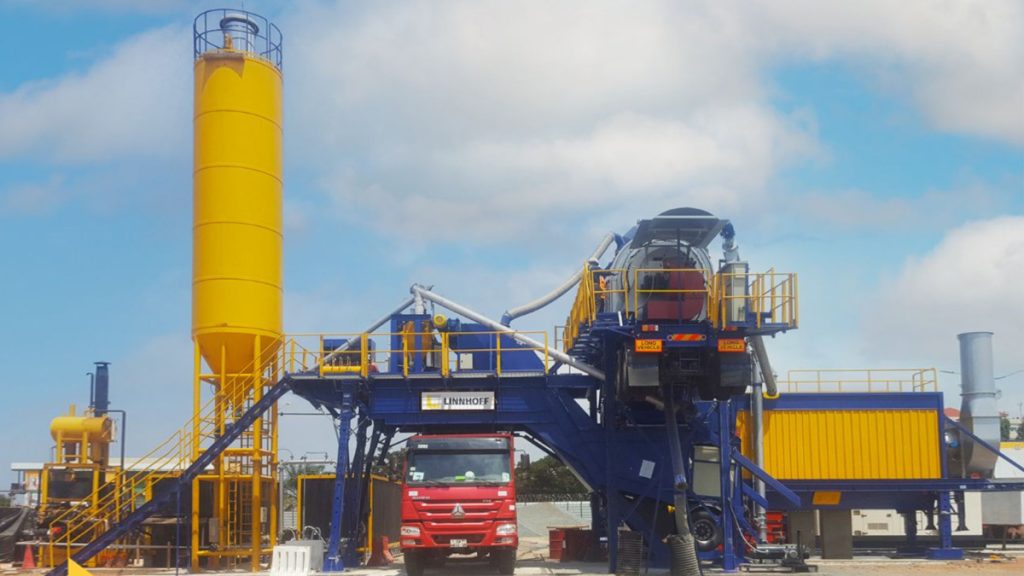 A Linnhoff TSD1500 Mobile Asphalt Plant has achieved remarkable progress on a high-profile African road project, the Grade Separation of the Tema Motorway Interchange. The roundabout at the Interchange had been troubling motorists with its severe traffic congestion that often exceeded 1 km during peak hours, and had become a pressing issue for the government to tackle. The ‘Project for the Improvement of Ghanaian International Corridors’ was therefore implemented – one of the priority projects proposed in the ‘West Africa Growth Ring Corridor Master Plan’. A US$57million grant from the Japan International Cooperation Agency (JICA) soon followed in aid of this project.

The Motorway Interchange at Tema, Ghana’s largest port city, forms the crossroads of two of the country’s busiest international corridors: National Highway 1 (N1), which hugs the Ghanaian coastline virtually all the way between its borders with Ivory Coast and Togo, and, in the far east, National Highway 2 (N2), its main north-south highway which leads up to the border with Burkina Faso.

In February 2018, work on the Tema Motorway Interchange began, transforming the roundabout into an interchange with an underpass, the construction of a 2.1 km three-lane dual carriageway with 730 m underpass on the N1 and improvement of 1.9 km of two-lane dual carriageway on the N2. It also included the paving of five service roads and eight ramps for right-turning traffic, a 190 m-long box-culvert underpass, four disability-friendly pedestrian bridges, traffic signals, street lighting and other safety-critical features.

Work on the Tema Motorway Interchange began in February 2018 where the Linnhoff TSD1500 MobileMix asphalt plant churned out 100-120 tons of hot mix asphalt per hour.

The plant’s unique dual-function screen drum technology enables both the drying and screening of aggregates to be processed in the same drum, eliminating the need for a hot elevator and vibrating screens. Not only does this reduce fuel consumption and emissions, but maintenance is easier too, reducing costly downtime.

All of the four main mobile modules that make up each Linnhoff TSD MobileMix asphalt batch plant are pre-assembled at the factory, before undergoing rigorous test cycles to ensure smooth set-up once they reach the jobsite. And, being equipped with a hydraulic powerpack self-jacking support system, there is no need to employ large cranes for the installation and dismantling processes, meaning plant operation can begin more quickly.

By offering important advantages in terms of enhanced mobility, the Linnhoff TSD series is ideal for use in remote locations or short-term projects. After the work on Tema Intersection was completed, the plant was moved to the National Trunk Road N8 jobsite. The mobility of the plant is extremely beneficial, especially when the contractor moves on to different projects, explained Teo Siang Leong, General Manager (Sales), Lintec & Linnhoff Asphalt Pte Ltd.

“In Africa, renting cranes can be difficult and expensive, and then finding suitable trucks to transport the individual modules is even more costly. However, each of the four main mobile modules of our Linnhoff TSD MobileMix Asphalt Plants comes with built-in chassis, so they are much easier to mobilise as they can all be quickly dismantled and transported as only prime movers are needed.”

According to B&FT Online, the improvements in the Tema Motorway Interchange is expected to shave 15 minutes off the 20-minute delay that motorists used to experience at the old roundabout. It would also improve the capacity, safety, and efficiency of transport and freight that was generated in Tema, Ghana’s largest port city.

This high-quality road infrastructure will lead to vastly improved logistics to and from Tema Port, boosting trade with neighbouring countries. It will bring a better future for all people in the region, contributing not only to Ghana’s economic growth but also the economic development of West Africa as a whole.

Construction And Mining Machinery Industry Getting Ready For bauma 2022