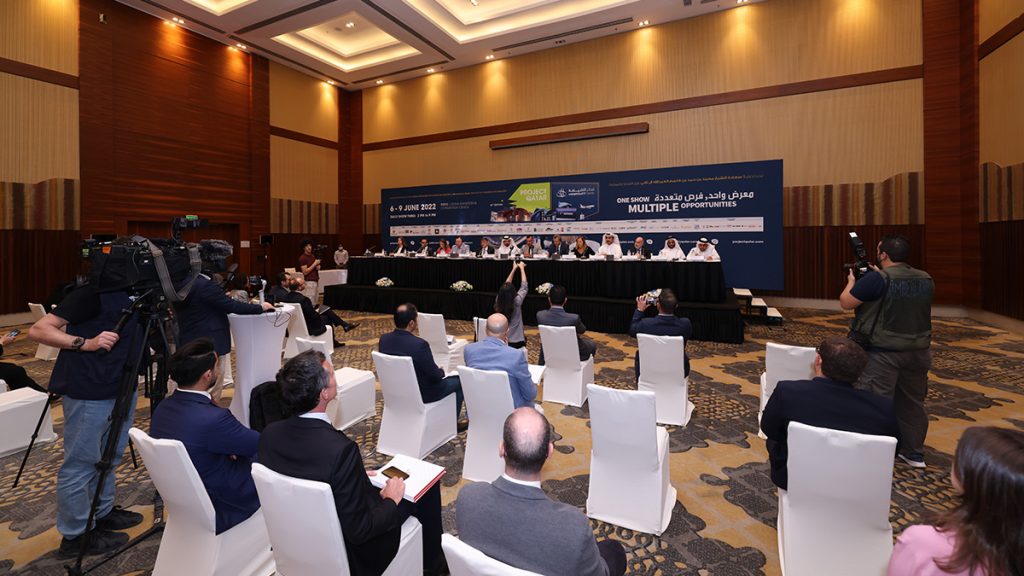 IFP Qatar revealed that ‘Project Qatar’ and ‘Hospitality Qatar’ have now been combined into one major exhibition that will set the stage for multiple opportunities, from June 6 to 9, 2022, at the Doha Exhibition and Convention Centre. The event will also be the last major international trade event hosted by Qatar before the FIFA World Cup 2022. The announcement came during a press conference held today (Tuesday, May 31, 2022), at the InterContinental Hotel Doha – The City, which was attended by several of the event’s partners and sponsors.

Haidar Mshaimesh, General Manager of IFP Qatar, said: “By combining the two exhibitions, we aim to optimise space and welcome the public through one major event, as we are also investing the state’s major resources into making the most anticipated event in the world, the FIFA World Cup 2022, a success. As a result, combining the two strongest exhibitions in the local market before the commencement of the World Cup represents a good period for entities and exhibitors to seize the opportunities and build alliances and commercial partnerships in the construction and hospitality sectors at the same time.”

Project Qatar, now in its eighteenth year, is the country’s first and oldest business fair for construction and related industries. The exhibition offers access to the growing Qatari construction market, as well as new business prospects with companies of all sizes, making Project Qatar an unparalleled platform for growth and development.

Similarly, Hospitality Qatar, now in its seventh edition this year, is the only trade fair in Qatar for the hospitality and HORECA sectors and is considered the most prominent and oldest exhibition directed towards the local, regional, and international companies working in the tourism and hospitality sector. The event represents a unique opportunity to enhance the industry’s presence, while attracting more scope for sponsorship and advertising. The Hospitality Qatar exhibition contributes to the tourism and travel sector’s growth and is an ideal platform for all participants, including producers, suppliers, and experts, to move forward into a new era in the sector’s development.

The event will welcome more than 300 exhibiting companies, distributed among 180 international firms from 30 different countries, seven of which will participate in official national pavilions, along with 120 Qatari companies from major government and semi-governmental agencies and the most prominent private sector companies. In addition to the Public Works Authority as the strategic partner, the event is also supported by Qatar Chamber, as the business community partner, Qatar Tourism, as the hosted buyers sponsor, Manateq, as the economic partner, Qatari Diar, as the property development partner, Investment Holding Group, as Diamond Sponsor, Suhail Industrial Holding Group, as industrial partner, Al Sraiya Holding Group, as Platinum Sponsor, Metito Company, as Gold Sponsor, Milaha and Q Terminals as Silver Sponsor, along with Vodafone, as innovation partners, among others.

As for visitors, Mshaimesh confirmed that the exhibition will welcome no less than 20,000 visitors from the construction and hospitality sectors, stating that the most notable among them will be several international trade delegations who will be able to benefit from their visit to Qatar and assess the country’s readiness for the upcoming championship. In particular, he called attention to the visit of a large delegation from the Federation of Saudi Chambers of Commerce, comprising more than 25 members, which is the highest commercial delegation from the Saudi private sector to visit the State of Qatar since relations returned to normal between the two countries.

Saoud Al Tamimi, Engineer and Manager of Roads Projects Department (RPD) from the Public Works Authority, the strategic partner of the exhibition, said: “The Public Works Authority is participating for the sixth consecutive time in Project Qatar, through which it will showcase its achievements in major infrastructure projects. This year’s participation represents an exceptional opportunity to highlight the authority’s role and contributions over the past years in preparing the necessary infrastructure to host the FIFA World Cup 2022. The authority’s strategic partnership with Project Qatar comes in line with our vision to enhance communication and partnership with various private sector companies that contribute to the implementation of projects in the country. We look forward to the exhibition as an ideal platform to meet a large group of consultants, contractors, and suppliers with whom the authority can collaborate in the future.”

In terms of international participation, Italy takes the lead with two pavilions, one in each exhibition, together constituting over 30 companies. Commenting on this participation, His Excellency Mr. Alessandro Prunas, Ambassador of Italy to Qatar, said: “The year 2022 will not only be the year of the historic and unforgettable World Cup, but also a wonderful year for the bilateral relations of the two countries, as it will witness the celebration of the thirtieth anniversary of the opening of the Italian Embassy in Doha.” H.E. further spoke of the contributions of some Italian companies to the World Cup projects, particularly in the areas of transport and infrastructure, such as the Doha Metro and Al Bayt Stadium, which were built through a joint venture between Italian and Qatari companies. 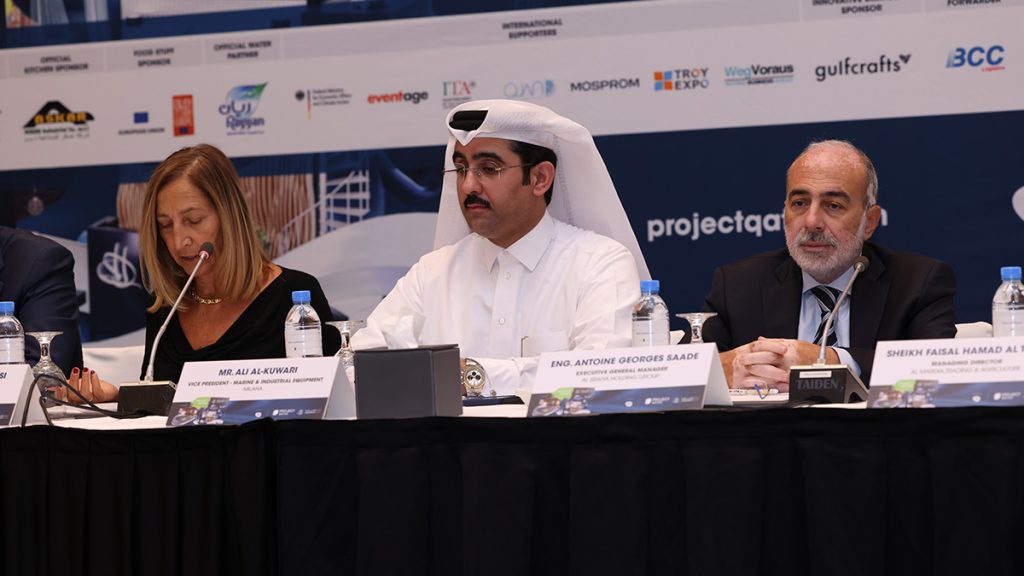 On the regional level, this year also highlights the participation of the Suhail Industrial Holding Group, the largest industrial company in the Qatari private sector, as an industrial partner for the first time in the exhibition.

Mohamed Al-Jaja, Director of Sales and Marketing at Suhail Industrial Holding Group, said: “The company is moving forward at a rapid pace, backed by the state’s support for the industrial sector, as it strives towards self-sufficiency to meet the needs of government entities and the Qatari market. Suhail Holding Group is moving towards new possibilities of industrial production based on the recycling of metals, reviving resourceful wealth created by the state’s surge in construction and infrastructure projects, and adequately leveraging the wastes of metal and steel to produce and supply all the metal and plastic products it requires, some of which were never produced in Qatar before. However, it is currently produced entirely by a Qatari company that is determined to enter worldwide markets with competitive products.”

Commenting on the German participation in the exhibition, Dr. Julia Harrier, Deputy Head of the German Mission in Qatar, said: “Germany has been and continues to be a major partner in Project Qatar for the 16th year in a row since its inception, with an official national pavilion. The German pavilion at the exhibition is supported by The Federal Ministry of Economic Affairs and Energy, which identifies the importance that Germany places on the Qatari construction sector and the opportunities that this sector offers German businesses even after the end of the FIFA World Cup 2022. Additionally, the German participation will be even more significant this year against the backdrop of the recent visit of His Highness the Emir of the State of Qatar to Germany, and the discussions that contributed to supporting and strengthening bilateral relations, further improving the investment partnership, and increasing the volume of trade and economic exchange between Doha and Berlin.”

Furthermore, Q terminals is attending Project Qatar for the third consecutive year, building on its successful participation in the event since its first appearance in 2019. Q terminals, founded in partnership between Qatar Ports and Qatar Navigation QPSC to operate the first phase of Hamad International Port, is the first venture to ensure a smooth, safe, and effective flow of commercial traffic in and out of Qatar, maximizing port capacity by relying on an experienced team that strives to establish and apply the highest standards of service, quality, and reliability in port operations through innovation and partnership.

Jaber Alhajeri, Head of Public Relations at Q terminals, stated: “The company’s participation in Project Qatar this year aims to highlight the company’s past accomplishments and educate the audience of the event about the firm’s goals for the next phase, as well as to form new collaborations with local and international market players. This is especially important given that the exhibition is attracting a large number of international companies looking to introduce their products to the market and improve their business relationships with the State of Qatar.”

In addition to the exhibition, a three-day conference will also be held to examine Qatar’s readiness for the FIFA World Cup 2022, through a series of sessions and presentations that will highlight the capabilities prepared for this event.

Project Qatar And Hospitality Qatar 2022 Wrap Up On High Note With 17,000 Participants