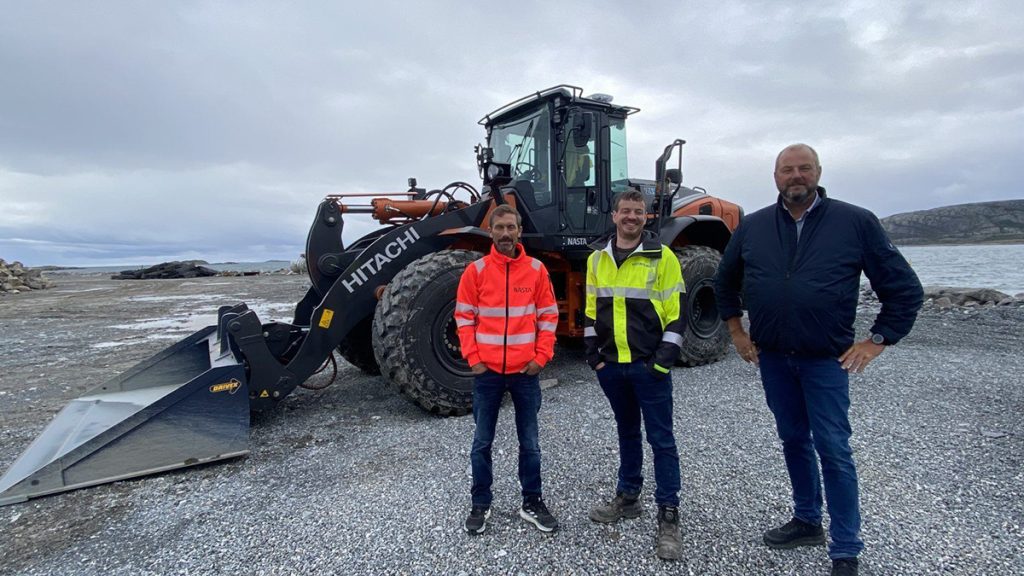 One of Europe’s first ZW220-7 wheel loaders has been delivered to Veinor AS – based just north of the Arctic Circle in Bodø, Norway – by the country’s authorised Hitachi dealer, Nasta AS. The official handover took place at the suburb of Langstranda, where the latest Hitachi model will work on its first project.

Veinor’s Construction Manager, Michael Karlsen, who also has extensive experience as a machine operator, explained the decision to invest in the new generation: “I like Hitachi machines very much, but I am even more excited at the delivery of a new machine on this occasion, as it is the first wheel loader in the new -7 series.

“We bought the ZW220-7 from the brochure – without actually seeing it in the flesh! Quite simply, we had the desire to try something new on this side of our fleet, and we have had Hitachi machines supplied by Nasta in the past, which all worked very well.

“In addition, we have bought pallet forks, a crane attachment and levelling bucket to be used with the wheel loader. As our company is relatively new, we need to buy some attachments to go with our machines, and besides, the ZW220-7 will be used on a wide range of projects.”

After a brief introduction to the wheel loader’s functionality, Michael took the wheel for a test drive and afterwards said with a big smile: “It feels good to operate, as it’s very stable and user-friendly. For example, it’s so simple to change attachments, which will be advantageous for the applications it will be working on. Overall, I really like the look of the ZW-7 wheel loader, with the black detail added to the orange colour scheme.  For our use, it is perfect!”

Also present at the handover were Nasta’s technical manager Espen Olsen and salesman Trond Viktor Meland. Espen has worked closely with Hitachi on the development of the new ZW-7 wheel loaders, and is delighted with the final product: “There are a number of new functions and design changes – both inside and outside the cab – that will make everyday life much easier and more comfortable for operators.”

Veinor was established in 2018 and has grown rapidly, having acquired another company (Bernhardsen Entreprenør AS) and expanded to a workforce of 40 employees. The contractor works on a large proportion of municipal projects, and also a number of other water, sewerage and housing jobs.

In total, Veinor’s fleet of construction machinery consists of three wheeled excavators (with trailers), seven medium crawler excavators, a mini excavator and three wheel loaders. These include a Hitachi ZX145W-6 and ZX210-6 – the first two excavators bought by the company – delivered in January 2019, and a ZX300-6 and ZX170W-6. Michael also took the opportunity to highlight other important purchase criteria for Veinor’s new equipment: “For me, it’s important that the operators are happy with their machines. It’s also vital for us to show a commitment to the environment. A new and well-maintained fleet of machines is always an advantage in this respect, especially when we’re completing municipal tenders.”

ZF Reaches Further Milestones In Its “Next Generation Mobility” Strategy