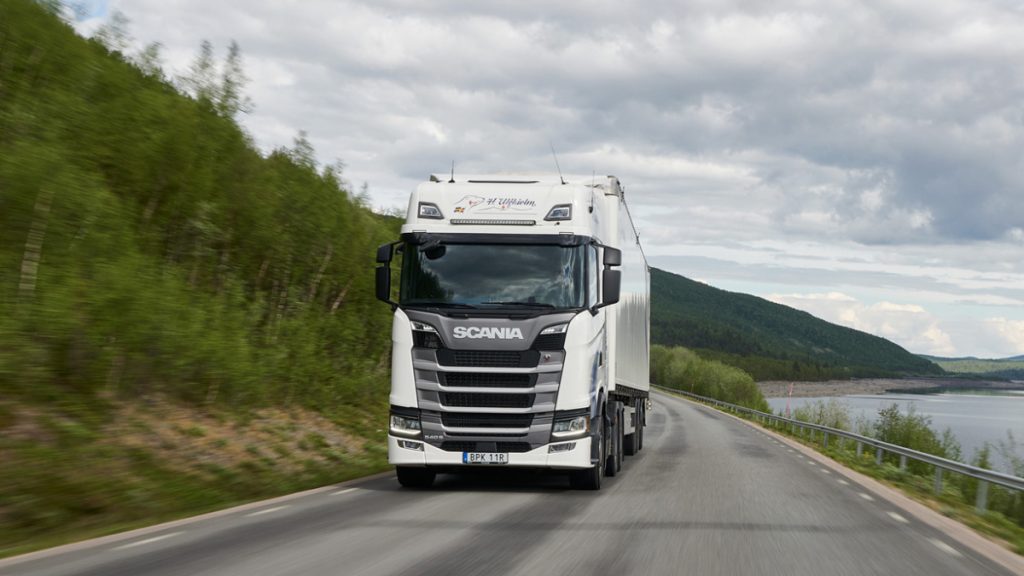 With its incredible fuel efficiency and superior driveability, the new 13-litre Scania 560 S truck tested by Herbert Ulfhielm Fjärrtransport could be the answer to hard-pressed hauliers’ prayers. With potential fleet fuel cost savings of €30,000 a year, the Swedish haulage company’s co-owner and field test driver certainly think so.

The fuel consumption levels of the new 13-litre Scania 560 S that’s being tested by Herbert Ulfhielm Fjärrtransport are really low. So low compared with other trucks that, at first look, the driver Jerry Olofsson and the company’s co-owner Lars Åström thought they’d made a mistake. But they were in for an amazing surprise.

“You are used to trucks where if you get under 40 litres per 100 kilometres, then you are quite happy. But during the latest trips now, I’ve sometimes been below 34 or even 33 litres –and that’s with the truck loaded with heavy timber products. The first time I checked it and counted it myself, I thought: ‘I must have forgotten to log some refuelling’,” says Jerry, who’sbeen driving trucks for 23 years; the past ten with Ulfhielm.

Twice a week, this friendly, chatty driver makes the 7.5 hour, 500-kilometre drive over the mountains from the Swedish city of Skellefteå to the Norwegian port of Bodø, hauling timber products. The next day, he heads back to Sweden, loaded with deliveries of waste products for use in district heating systems, as well as wood chips and tyres. The truck is his ‘office’ and achieving good fuel economy is always an important consideration in his work.

“During the winter, the truck always uses a little more when the truck is idling because it’s much colder and the truck is heavier,” he adds.

“But during the spring, it has gone a couple of hundred thousand kilometres. We started to notice that there the fuel figures are low, so I called my boss Lars and asked him if he’d checked it! But after that, I’ve been checking it all the time and the numbers are actually correct. And it’s fun! Because I’ve not changed my driving style; I have just been driving as I usually do.”

A fuel consumption godsend in a tough industry

Jerry’s boss, Lars Åström, has been driving trucks since 1980. Lars started out with Ulfhielm back in 1984, when it was run by his uncle, Herbert Ulfhielm. He’s driven millions of kilometres since then, as well as c-owned the Skellefteå-based company for the past 11 years With that experience, it’s fair to say that this laconic and laidback Norrlander has just about seen it all. But even Lars raised his eyebrows at the fuel consumption figures that Jerry was reporting.

“I was surprised because the difference was so big,” says Lars.

“It’s about six litres every 100 kilometres, and some weeks there has been an even bigger difference between our Scania R 490 and this one. The 490 has been at around 38 to 40 litres and this one has been fairly constant lately at 32 to 33 litres. Bear in mind that we still do not really drive the best roads and most of the time we’re carrying loads of up to 60 tonnes.”

“We have had several other field test trucks that were efficient, but there has never been a truck that has made as big a difference as this one now. If I were to update my fleet of five trucks, the fuel savings would work out at about €30,000 a year. For my company, that’s the equivalent of the instalments for another truck.”

That’s a welcome boost to the company’s profitability in an industry with increasingly tight margins. Herbert Ulfhielm Fjärrtransport has been in business for almost 50 years, but Lars Åström says the job has never been more challenging than it is these days. “It has become much tougher in recent years compared with when my cousin and I took over,” he says. “There’s much more competition now.”

A stable, comfortable and reliable drive

The other impressive aspects from the field test so far are the powertrain’s driveability and the cab’s driver comfort.  Jerry is especially grateful for the reliability and stability of the new powertrain and the improved power of the 560 S’s new engine. The fantastically beautiful terrain that he drives through twice a week sees him leave behind Skellefteå near the Gulf of Bothnia for a climbing, twisting run through the foothills of the Scandinavian Mountains.

The highest point on the road, not far from the Norwegian border, is 740 metres above sea level. It’s almost immediately followed by a downhill stretch towards Norway that has a 7% gradient. From a distance you can see some much higher mountains on the Norwegian side, still completely covered in snow in mid-June. It’s clear that the winters must be tough up here. Stunning scenery is all around, and there’s even the odd chance of seeing the Northern Lights on a clear, dark winter’s night, but it’s no picnic when you’re driving icy, snowy, single-lane roads in a fully loaded 60-tonne truck.

“When you spend so much time in the truck, you live, sleep and drive in it. Well-being is important, and you need to be able to trust it, especially in winter when it can be extremely cold,” explains Jerry.

“Sometimes it gets down to minus 40 degrees Celsius, and the next day there’s a snowstorm, so it’s vital to be able to trust the truck and vital that it does not stop. That’s absolutely the most important thing: that it must not stop! Everything else can break, but the engine must work when it’s that cold. It’s a matter of life and death.”

“But,” he adds, “this new truck is stable and it simply functions well. You sit well and you live well in a Scania. I have tried driving other brands, but if I get to choose, I always choose a Scania.” Jerry is also happy that the truck goes much quieter, thanks partly to smoother and faster gear shifting.

“When it’s noisy you can get tired, so I appreciate that it is quieter and more comfortable. Especially when I have a long way to drive.” Out on the mountain roads in the empty fells, he can easily drive for 100 kilometres without seeing anyone, but when he does meet other drivers, Jerry has been careful to avoid curious questions about the truck’s performance, especially as it says R 540 on the front.

“The torque is very strong at low revs; it pulls very far down at speeds so it feels stable. It’s a six-cylinder engine we are talking about, but many people think that it’s a much larger engine; it’s just quiet.

“A colleague from the Norwegian side drove up with me last autumn, and it was only at the end of the mountain top that he was a bit faster, even though he was driving a 580. I never learned what his fuel consumption was, but I guess I got him there!”

“I recom­mend that other customers try this model”

Ulfhielm has the test truck for two years, and the test is not even halfway done. But Lars Åström is already convinced. “I can say that this truck and powertrain have lived up to my expectations. I can recommend it to other customers to try, especially because of the lower fuel consumption, which makes a big difference to our business. I can definitely imagine buying it.”